The origin of the Gelbvieh (pronounced gelp-fee, German meaning “yellow cow”) breed can be traced back to the 16th century Germany where they were developed in the region known as Franconia. The Gelbvieh was bred from Celtic and Germanic red to red-brown breeds and in 1872 an official breeding policy was laid down.

In 1897 the Nürnberg Breeders Association for “Gelbes Frakenvieh” was established. In accordance with the breeding policy, the breeders succeeded in breeding animals of a uniform yellow-brown colour, with excellent performance as working animals and good growth. However, another requirement was added, namely milk production. Hence the dual purpose traits of the breed. The present breed society in Germany was established in 1899.

In 1952 a new breeding policy was formulated for Gelbvieh by means of a programme which provided for maximum use of the benefits of artificial insemination. This system was constantly refined, not only in respect of record keeping, but also in terms of planned matings.

In 1958, the German government imposed a stringent progeny testing programme on the breed in a deliberate strategy to improve performance in milk and meat production traits. They used AI extensively and applied objective measurement in selection for productivity, maternal characteristics, fertility and calving ease, as well as carcase quality.

Because of the early scientific approach, the Gelbvieh grew in popularity and the breed is currently found in the USA, South America, Australia, New Zealand, England, Canada, South Africa, Zimbabwe, Namibia and other neighbouring countries.

A European Invasion to Australia

In the early 1960's animal breeders from the UK, Canada and the USA began to take notice of the generally more muscular breeds of cattle which had developed in Europe, particularly the Charolais and Limousin breeds from France, and the more maternal Simmental breed from Germany.

Gelbvieh still hadn't been brought in and it was not until the mid 1970's that Gelbvieh reached North America.

By the late 1980's however, the breed arrived in the USA and it was immediately subjected to close scrutiny in the massive comparative breed experiments which were just then starting at the Meat Animal Research Center (MARC) at Clay Center in Nebraska.

When the research results became known, Gelbvieh had ranked highly, particularly in maternal traits and the all important economic trait of weaning weight per calf raised by Gelbvieh mothers.

Gelbvieh then became a research driven breed. The results of this research have been so noteworthy that 70% of cattle breeders near Clay Center and South Eastern Nebraska, now run Gelbvieh cattle or cross-breeds in their herds. They were identified as being the breed of choice, having the right combination of characteristics they desired (muscle, meat and milk).

These excellent research results prompted a rush to Gelbvieh and in 1989 and through the early 1990's, a wide range of genetics, in live animals, embryos and semen were imported to Australia.

In the early 1970's, the Assistant Director of the Scottish Milk Marketing Board at the time, Jim Swanee, had been impressed by some Gelbvieh animals that he had seen during some of his appraisal visits to Germany. He considered them to be more docile than Limousin but equal in other respects, and also that they had a more moderate frame and finer bone than the Simmental with Charolais size and muscle but with smaller calves eliminating calving difficulty. With these excellent traits they thought Gelbvieh had a future so semen was imported into Scotland.

In 1975, the same Jim Swanee was on a marketing visit to the Western Australian Artificial Breeding Board and persuaded them to import some semen from Scotland in two bulls, Scottish Herkules and Scottish Horst.

Clyde and Alison Johnson and family, of "Norolle Stud", Millmerran, QLD were the first to start grading up Gelbvieh in 1983 from Dairy Shorthorn and Poll Hereford stock. They registered the first purebred graded up Gelbvieh in 1991.

Norman Blackburn, from Boyup Brook WA, was the third person to use Gelbvieh semen in Australia in 1986.

"Gold Star 53X (Paula)" was bred by Albert Carlson from Cardston, Alberta, Canada, and imported and exhibited by Wattle Creek Gelbvieh Stud, Orange, NSW. She has become a Foundation Female of the Australian Gelbvieh breed and was sold to Ebony Lodge Gelbvieh at Willow Grove, VIC.

L A Trisun 8X was bred by L.J. Allen in Canada and imported and exhibited by a consortium - S J Gelbvieh Stud from Mendooran, NSW and Gelfee Cattle Co of Geurie, NSW.

These notable achievements focused attention on Gelbvieh and everyone began asking Gel-what? Gelbvieh was here to stay and many astute cattle breeders are now breeding them, being a European Breed of Choice.

Gelbvieh cattle are a large framed muscular breed not too dissimilar to a Simmental, Charolais or Limousin. They are renowned for having smaller calves which means they have less chance of calving difficulties unlike most other European breeds. Gelbvieh purebreds are traditionally a golden honey red colour, however black purebreds are available and Black Gelbvieh are proving popular with cattle breeders in Southern states.

The cattle are single coloured in their coat, with fine hair making them ideal in temperate to arid conditions. Gelbvieh are a very adaptable breed and are bred in all climates in Australia and around the world. Gelbvieh are also known for their quiet disposition and docility, especially when compared with other European breeds. 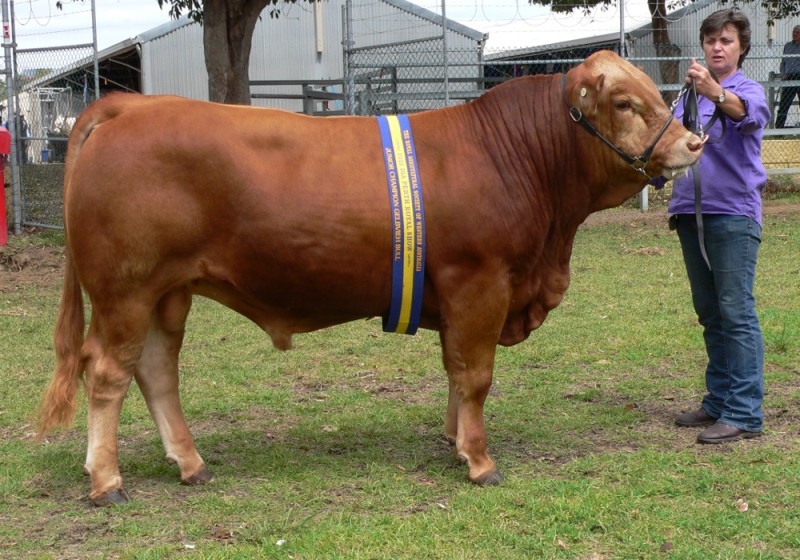